Distant Messages is a narrative based that depicts the relationship between lovers falling apart and one them trying to keep it alive (sort of, I guess) through a series of text messages. It takes place over three separate text exchange on separate days.

IMPORTANT NOTE: You will stuck in an infinite conversation loop. This is intended for thematic reason, but I think the implementation could be better.

A few notes:
- In the web version fullscreen is practically required otherwise most of the game isn't visible.
- In the windows version, escape quits the game. This may be needed.

I don't understand the ending...

Hey, sorry about that! I was worry it would have that effect. I definitely think the implementation could be better. Could you please give me some more information about how exactly it made you feel? Did it feel jarring and confusing? Did you assume it was a bug? Thank you, I really appreciate you taking the time to share your thought.

To be honest, at first I thought it was because I did something wrong. I kept on reloading the page and trying again and then kept on spamming, starting with all the nice options and then desperately changing to the aggressive options because as much as I didn't want to, I wanted a conclusion. Hell I even kept my laptop running at the end to see if anything would happen if I said nothing for hours.

And then I read your description.

Also I can see the effect you were going for but, in my personal opinion, I didn't like it at all. I'm not saying I wanted a happy ending for Mark and Victoria, but I wanted a conclusion of some sort. Or at least a happy ending for Victoria, like she moves on and struggles to find love but eventually does and it goes well this time. Then again, I have no idea who is more of the bad guy in this situation because you don't give us any backstory on them.

Hell, for all I know Mark was forced into the marriage by his family when he's gay or something and I'm just siding with Victoria when Mark isn't completely at fault.

I know that most people would just move on but I would have appreciated a little more dept. There could have easily been a little more backstory with Victoria's inner dialogue.

Or there could have been a secret where if you play a second time you unlock Marks viewpoint.

I'm sorry if I went a bit overboard aaaa

Thank you so much for responding! You encountered my biggest fear with the ending - it doesn't really work if the player isn't aware it is coming. That means if I develop this game further, I need to find a way to present that better so I don't have to stick a notice whenever someone plays the game. Or maybe the idea inherently doesn't work for some people, not sure. I think it feels too much like a bug, or something is broken. Maybe I should add a prompt in the game to turn the phone off and walk away from the relationship.

Everything else you mentioned are all great ideas I would have loved to address but didn't have the time in the 48 hour time limit, especially just adding more story and depth overall.

It's not sure how to do some of that. I like the idea of never breaking the text window. Especially inner dialogue. Do you do a "texting dream" sequence where the main character texts herself about her feelings? That could be interesting.

No, you didn't go overboard at all! Thanks so much! I am not sure if I'm going to work on this anymore, but if I do I'm going to be sure to work off your comment.

I'm glad I was able to help! If you do further develop this game I hope it works out well, if not, I'll support your other games :)

Thank you very much! I do appreciate it. 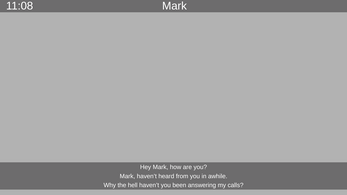